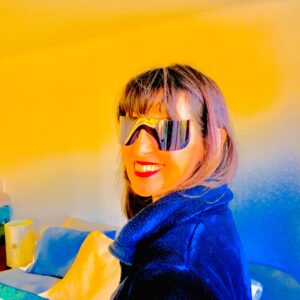 I was at Willamette Writers when first introduced to the writing of William Stafford two decades ago. The poems seemed understated and bland, and I was hoping the speaker would move onto a sexier topic. I have to chuckle, because now Stafford is my favorite poet, his beautiful, spare language full of music and zesty truths. Sexiness at its most elemental.

I stumbled upon this video of the poet (who died before I met him).

Stafford reads “First Grade,” which reminds us of what it is to be children conflicted about performing.

Stafford, the acclaimed Oregon poet laureate, then tells about: writing a poem about garlic for a free dinner. Getting published in some unremarkable high school newspaper. Incidental places where his work found a home.

This great soul found joy in getting published, wherever his work was welcomed. The giddiness he feels over these little wins is evident. Just look at that grin.

No haughtiness, no self-consciousness, no ego.

I had to admit that somehow, I had come to be deeply suspicious of my own desire to get published. I began leaving it out of the equation.

“Oh, that’s just prideful and conceited. You’re a show-off,” I told myself.

I lost touch with that child inside who is just so happy and proud about what she is able to do. “I made something! Look! I’m sharing it with the world!”

What could be purer, sweeter, or more fun?

If you’ve relegated “getting published” to the rubbish heap of selfish dreams, think again. It’s not about showing off, but showing up as the rockstar who is enjoying her place in the glittery lights for the sheer, humble sense of fulfilling her purpose.

This impulse to share our talent is something good. Brenda Ueland says writing is “not a performance but a generosity.”

I was able to sort out what was selfish and what was beautiful. I am grateful to William Stafford for showing me with his smile, what the difference is.

If you’d like to take the next step toward getting short writing published, join me for Get Published class at Clark College July 11 & 12, 2022, on Zoom.