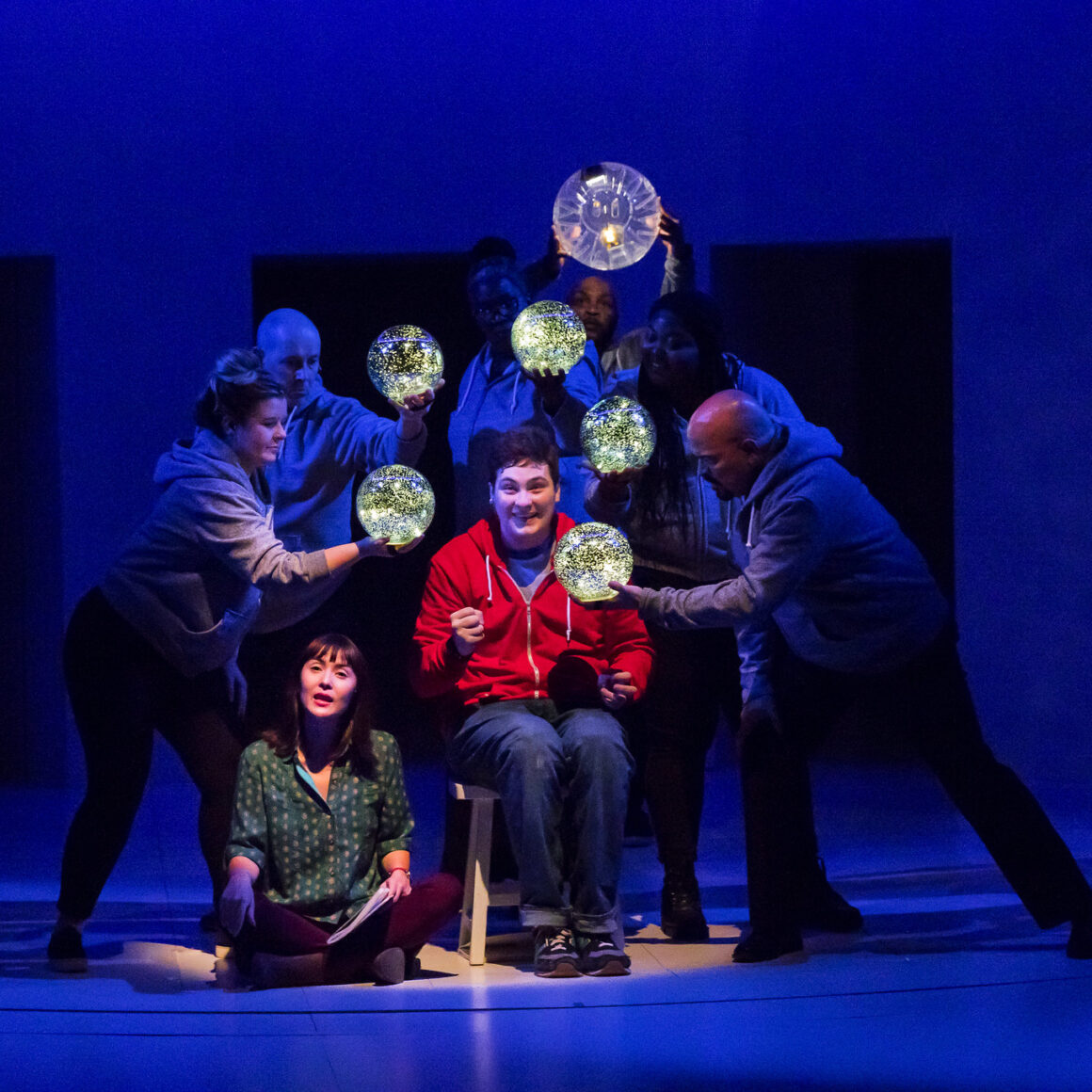 It’s the strangest crime that has ever happened in his neighborhood, and he simply must solve it: who speared the dog, Wellington, with a pitchfork?

The Curious Incident of the Dog in the Night Time is electric, illuminating, humbling, maddening, charming, funny. I was floored by its impact on me. This was my first time watching a play with a mask on the entire time, and to the credit of Portland Center Stage, I completely forgot about the mask by the time the play finished.

It so happens young Christopher Boone (played by Jamie Sanders), is on the autism spectrum. He has to figure out: what do you do when people do mean things that don’t make sense? How do you solve a mystery if people won’t answer your questions? What if someone close to you is lying?

Poignant and crisp, this show reveals the earnest and straightforward and mathematical view of this 15-year-old whose brain doesn’t work like everyone else’s.

“I always tell the truth,” he says. He isn’t believed. Especially by the police officer who finds him kneeling next to the neighbor’s dead dog, and puts a hand on Christopher–who has always made it clear to everyone, he doesn’t handle physical touch.

This sets in motion events that stress Christopher to the breaking point. Oh, and when he finally does break down, it wrenches your heart beyond belief. The theater was frozen, stunned, as Jamie Sanders emitted the most unearthly, yet pure and believable sounds and movements of pain that I’ve ever witnessed. 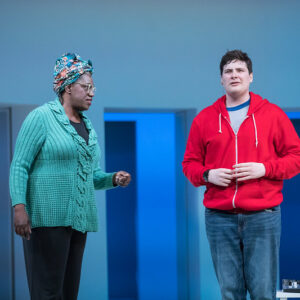 “The word metaphor is a metaphor,” according to Christopher. “I believe it is a lie.” Daunting and humbling to this poet who leans hard on figurative speech.

There were laughs upon belly laughs. The antics of the six voices who help tell the story are absolutely hilarious. There were wonderful moments with Ithica Tell, one of my favorite Portland actors, whose portrayal of the kind but no-nonsense neighbor, Mrs. Alexander, was incredibly real and satisfying, not to mention done with a gorgeous West Indies dialect. Mrs. Alexander listens to Christopher, doesn’t react to his weirdness or take offense when he doesn’t like the color of her pastries. She is open to learning about his world.

The same goes for Siobhan (Ashley Song), Christopher’s teacher, who encourages him to write a book of his detective work. She reads it intently, to the audience, and this becomes the narrative structure of the play. I was re-inspired by this work that has found me, of helping people tell their stories–out loud–especially those people who don’t fit into the world’s idea of “normal.”

Indeed, I often feel abnormal, as a highly sensitive person, as a SAD sufferer, as a trauma survivor. I have to limit screen interactions, get outdoors daily, be vigilant with self-care. It’s nothing like what an autistic person experiences, but it’s still “different ground”–and differentness can build bridges. Jamie Sanders said in an interview: “I have a different set of circumstances than Christopher. I have Tourettes, and it causes me to be sensitive to the world around me.” He uses that connection to make Christopher Boone dazzlingly real in a heavy-footed, big-eyed, math-loving embodiment.

But oh, the richness of this journey. To make it even better, on December 21, Portland Center Stage is having a sensory-friendly performance, for those who can easily be overloaded. They have created an amazing way to soften and mitigate the effects of bright lights, loud noises, and crowds. It makes me proud to be a PCS fan.

Stick by your truth. Even if you are put together differently than others. And please, please, seek out the stories of those who might see seem strange at first glance. Listen. Maybe, repeat back. No metaphors are required.