After three hours on a transcontinental flight, I stepped into the aisle.

It was awkward, and people were watching, but I really needed to stretch, so I went on boldly as I could, striking a falling star pose. A woman in the row behind me leaned across the seat like a neighbor chatting over a fence. “You have a practice, don’t you?”

She sighed. “I used to practice yoga. I loved it. It felt so good! But I changed my work schedule.” She went on to tell me about her stressful job.

“Is there a different class that would fit your new schedule?” I asked.

“There are a ton of classes,” she said. “But I’ve stopped and can’t get started again.” 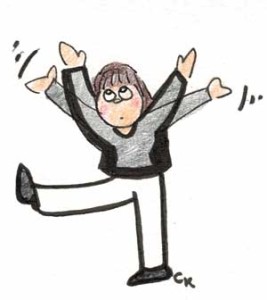 A few days earlier I had lunch with a woman who said, “I felt so much better when I was eating gluten-free.”

“I went to Italy,” she responded. “It was pretty much impossible to eat gluten-free in Italy.”

“So when did you go to Italy?

Today, I talked to a writer who explained he hadn’t written anything since the last time he attended my class, over a year and a half ago.

It happens to all of us: we get interrupted in our practice. The problem is, we mistake stopping for a permanent condition. 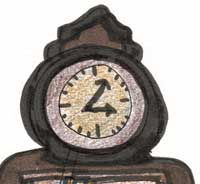 You’re tooling along a city street in your purple 1989 Volkswagen. You come to a stop sign. You stop, of course.

But then you stay stopped.

You sit there. Cars line up behind you and start honking. You shake your head and yell out your window, “Can’t you see I’m stopped?”

Sheesh, you think to yourself. I was going along just fine but that sign forced me to stop. You shake your head. I guess I’m not a real driver, or else I wouldn’t be stuck here.

Get this: stopping is not a permanent condition.  Just because you stop doesn’t mean you are no longer a writer, an artist, a creator. You can start again – anytime.

All summer, I had the best intentions to paint.

But, I had three grown-up kids home for several weeks. I had vacation plans, and an extensive copywriting project, and on top of it all, a mini midlife crisis, complete with built-in emotional roller coaster. (It slices! It dices!) Anyway, I stopped.

I’ve had many stopping points in creating, and I’ve learned not to freak out about them. They can happen for many reasons–a shifting schedule, a vacation, an illness, or a work situation.

When you know that stopping cannot stop you, you become invincible in your practice.

Sage Cohen, my friend, fellow writer, and co-panelist at Wordstock early this month, confessed to the audience, “I don’t write every day.” In many circles, to write less than every day is considered creative suicide.

She went on, “I know myself. I know I can’t not write.” Sage takes this even further when she explains on her blog that she gave up much of her writing life for over a year – a stretch that would convince many people they were permanently finished.  But because Sage had already developed a tried-in-the-fire practice over decades, she was not fazed by stopping.

Yet since I’m a beginner as a painter, I could easily get derailed. The newer you are to a practice, the easier it is to let stopping stop you.

But my other creative practice, writing, has taught me a few things. I have a restart button.

I signed up for an ongoing watercolor study class that I take from the fabulous Lee Baughman.

At the end of summer, as I inspected my gummy, dried out paint box, I knew my temporary stop was nothing to be upset about. I knew that when I walked into Lee’s classroom pulling my rolly cart behind me, he would welcome me with a big smile. 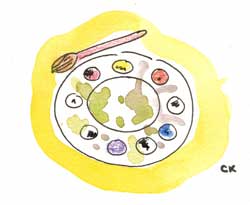 And it was so.

The first class of fall, I overheard a couple of students confess to each other, “But I didn’t paint all summer!”

I didn’t say a word.

Because it didn’t matter.

All that matters is that I know stopping is not The End.

All that matters is that I’m here – and for pretty much anything worthwhile in life, it’s the same thing. Painting, like writing, like love, is what I do – in season and out, or with long summer breaks.


“The soul grows by subtraction, not addition.”

“Giant steps are what you take, walking on the m

First one on the trail gets all the spiderwebs. #

Checked in with the light this morning. It still s